DDD South West (DDDSW) 7 was hosted at Redcliffe Sixth Form Centre in Bristol. DDDSW hosted five one hour sessions with four tracks for each session, these ranged from topics such as agile development to architecture.

DDD conferences started back in 2005, they are community driven and organised by developers for developers. They provide a great way for people to share experience either good or bad and just get to chat with other like minded developers.

You can get involved with any aspect within a DDD event, you can either put your self forward to be a speaker, a helper or just turn up and attend the talks and discussions what happened throughout the day.

The event started for me at around 16:00 where we set off on route down to Bristol from Sheffield. There were a few of us from the dotnetsheff group that decided to car share, this gave us a good opportunity to chat about geeky subjects on the way down.

We arrive in to our Bristol hotel around 20:00, and sadly I thought I had missed out on the pre-event speakers meal. So we decided to go grab a burger down the road and then catch up with the speakers later on that night.

We arrived at the event around ​08:45 on Saturday morning, we collected our name badges and goodie bags and made our way up to the breakfast pastries.

I had already looked up the agenda prior to the event, but I still had not decided which talks I would be attending. There was a vast amount of material covered on each of the sessions and all seemed too interesting!

​What is .NET Standard?​​ with Adam Ralph

Having already published my own .NET Standard Library to nuget (CompaniesHouse.NET) I was a bit on the edge about attending this talk. I’ve read most of the .NET Standard content from the internet and wanted to get another person perspective on the subject. I feel it is so easy to just miss a few good points when just working on your own.

The talk by Adam Ralph was really informative and even included some new topics such as .NET Standard 2. 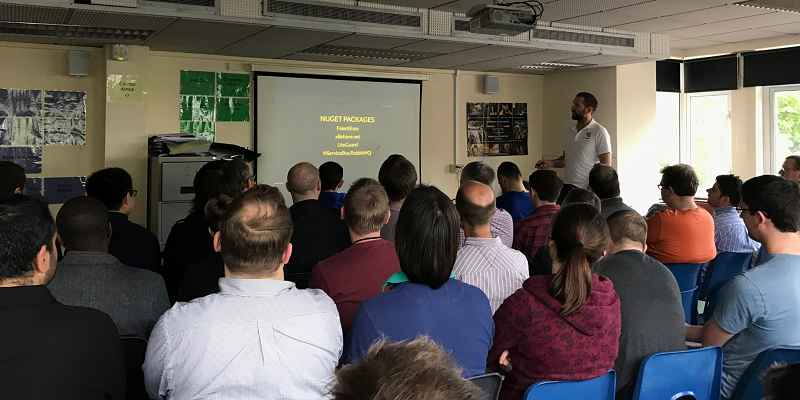 This talk was presented by myself, there were around 55 attendees in my room. I covered a vast amount within a hour which I was fairly impressed with but I did felt the first part was a bit rushed, however most people were able to keep up.

The feedback from the attendees of my talk was fairly high, I had a speaker knowledge rating of 88% and a speaker skills rating of 75%. However there were a few people who wanted to see more demos, I did however have a few more lined up If my time had not ran out.

One of my other feedbacks were:

Very interesting content for my industry, but could work on saying “kinda” and “like” a little less :)

I totally agree with this attendee but if you know me personally I excessively use these in everyday life as well!

Overall I covered everything that was intended and it also sparked a couple of conversations within the break while drinking my next round of coffee.

Great 2nd talk of the day from @kev_bite about Azure Service Fabric! I need to go home and play with this now! #dddsw pic.twitter.com/ppUFi1DLmU

Having previously worked with json:api I was excited to learn how to fall in love with HATEOAS​! The talk was great, Dave talks about being Restful and how we ended up with HATEOAS​. He then showed a few examples of specifications that you could conform to.

Fun with the Twitter Stream API with Dave Mateer​

This talk caught my eye due to the stack that Dave was planning to use:

I have watched a few videos around the ELK Stack (Elasticsearch, Logstash, and Kibana) before but felt like this would be a great opportunity to watch something live for once and also have the ability to ask questions if required.

Even though the twitter streaming feed was not playing nicely throughout the first set of demos the talk gave a nice insight of how you can get more performance by just offloading our workload as fast as possible.

Having been to a fair amount of Naeem talks before I knew what to expected. The talk was well thought out and well presented. A lot of the code presented within this talk I could relate to from previous experience. Naeem explained that the “right” way to architect our software totally depends on our own situations, but every so often we should take a step back and re-evaluate our current direction.

Overall the DDDSW7 was a great event, not only the speakers were great but the conversations that the talks sparked were great to get involved with. No doubt we owe it to the Team behind organising the DDD event and I look forward to the next event!